Remittances, usually understood as the money or goods that migrants send back to families and friends in origin countries, are often the most direct and well-known link between migration and development. Remittances exceed official development aid but are private funds. Global estimates of financial transfers by migrants include transactions beyond what are commonly assumed to be remittances, as the statistical definition used for the collection of data on remittances is broader (see IMF, 2009). Also, such estimates do not cover informal transfers. Remittances can also be of a social nature, such as the ideas, behaviour, identities, social capital and knowledge that migrants acquire during their residence in another part of the country or abroad, that can be transferred to communities of origin (Levitt, 1998: 927). 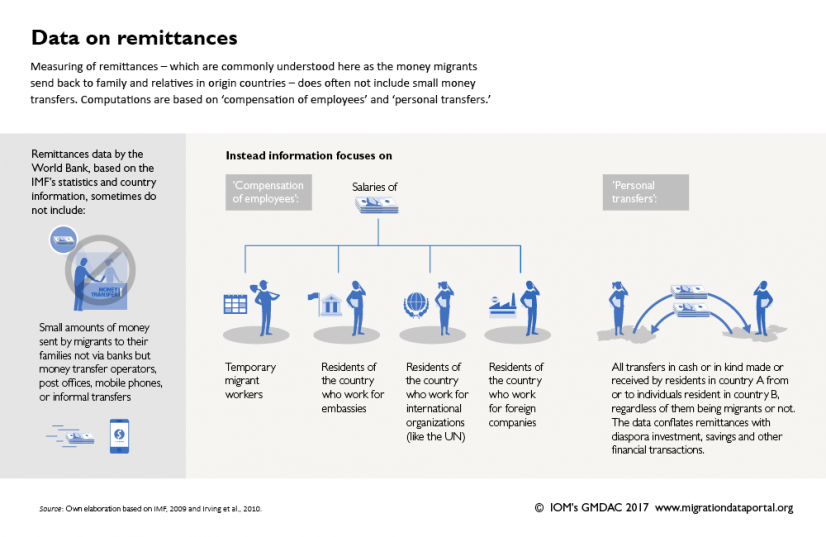 See our thematic page on COVID-19 and migration data for more data on the impact of COVID-19 on remittances.

In April 2020, Ratha et al. projected a decline in remittance flows to low and middle-income countries (LMICs) by about 20 per cent because of the economic crisis caused by the COVID-19 pandemic which negatively affected wages and employment for migrant workers. By October 2020, Ratha et al. adjusted their projections to a decline in remittance flows of 7.2 per cent to USD 508 billion. Latest data show that instead, remittance flows fell by only 1.6 per cent to USD 540 billion, defying projected declines that would have been the sharpest in recent history (World Bank, 2021). According to the World Bank, the decline in recorded remittance flows in 2020 was smaller than the one during the 2009 global financial crisis (4.8%) (ibid.). Remittances flows also surpassed the sum of Foreign Direct Investments (USD 259 billion) and overseas development assistance (USD 179 billion) in 2020 (ibid.).

Among the key drivers for the steady flow of remittances in 2020 were migrants’ desire to help their families by sending money home and drawing on savings (ibid.). Other factors include a fiscal stimulus that resulted in better-than-expected economic conditions in host countries, a shift in flows from cash to digital and from informal to formal channels, and cyclical movements in oil prices and currency exchange rates. (ibid.).

Remittances are usually understood as financial or in-kind transfers made by migrants to friends and relatives back in communities of origin. However, the statistical definition of international remittances only partially reflects this common understanding.

The International Monetary Fund, the main provider of international remittances statistics based on Central Bank data, defines remittances as the sum of two main components in their Balance of Payments Statistics manual:

(1) “Compensation of employees”: This refers to income earned by temporary migrant workers in the host country, and the income of workers who are employed by embassies, international organizations and foreign companies (or “the income of border, seasonal, and other short-term workers who are employed in an economy where they are not resident and of residents employed by nonresident entities” (IMF, 2009: 272). It is important to highlight that the entire income of temporary migrant workers  is included in this definition, although the income may never actually be transferred (at least not entirely) to the origin country as migrants still have to cover their own living costs. Furthermore, the salaries of staff employed by foreign employers (such as embassies or transnational companies) also count as remittances, as these civil servants, diplomats, military personnel and others are considered residents of the origin country (IMF, 2009), although most of these employees may actually not be migrants nor transfer this money anywhere else.

Remittances can also be sent within countries and not just across borders. These are called internal remittances. Furthermore, not all remittances are of financial or in-kind nature. Social remittances are defined as “the ideas, behaviours, identities and social capital that flow from receiving- to sending-country communities” (Levitt, 1998: 927). Social remittances include innovative ideas, valuable transnational networks, knowledge, political values, policy reforms and new technological skills.

The World Bank provides annual estimates of remittances flows globally (and bilaterally), based on national balance of payment statistics produced by central Banks and compiled by the IMF. (See definitions of the two main remittances components above that give examples of what is included and what is not [Plaza and Ratha, 2017: 65-78]). Data cover remittances inflows into and outflows from countries. The latter are less prominent in the migration and development debates but can be an indication of significant immigrant populations in a country, especially if they exceed remittances inflows.

The World Bank also produces estimates of remittances’ transaction costs on a quarterly basis. These are “average transaction costs of sending remittances to a specific country” and are computed as “the simple average of the total transaction cost in percentage for sending USD 200, charged by each single remittance service provider (RSP) included in the Remittance Prices Worldwide (RPW) database to a specific country”. World Bank researchers derive these estimates through either undertaking actual transactions themselves to obtain prices, or by inquiring on the transfer costs to a number of banks and money transfer operators (Alvarez et al., 2015: 45).

Since 2007, the Financing Facility for Remittances (FFR) of the International Fund for Agricultural Development (IFAD) has published data and statistics on remittances through its series of Sending Money Home reports based on information from Central Banks, the IMF, and the World Bank RPW database, among others. The reports cover central issues affecting remittances from both a global and regional perspective and provide comparative indicators to measure the importance of remittances among regions and subregions. The latest report (2017) includes data and analysis of remittances and migration trends for developing countries over the past decade as well as the potential contributions of remittances to the Sustainable Development Goals.

In 2018, IFAD’s FFR launched RemitSCOPE, an online tool providing regional, subregional and country-level data and remittance market analyses. It aims to address the fast-changing market realities in the remittance industry in order to help bring together the goals of remittance families, as clients, and the strategies of the private-sector service providers. RemitSCOPE provides market profiles for 50 countries or areas in the Asia and the Pacific region but additional regions of the world will be included gradually.

The World Bank estimates are used to provide a large dataset covering most countries around the world. This allows the user to understand trends and the magnitude of transfers, comparing them to other flows such as Official Development Assistance (ODA). However, the estimates are far from accurate, due to the methodological challenges outlined below (Alvarez et al., 2015; World Bank, 2016; Plaza and Ratha, 2017).

The balance of payments category of “compensation of employees”, as defined by the IMF, can potentially significantly overestimate migrant remittances if a country has a large UN and/or embassy presence, and hosts factories of transnational corporations employing large numbers of workers. These employees are counted as “non-residents” or migrants in the country, and all their salaries are recorded as remittances. It is thus not possible to ascertain whether the official IMF and World Bank figures are accurate for these countries or considerable overestimates due to embassy, UN and foreign companies’ staff salaries being counted as well (Alvarez et al., 2015).

Statistically, migrants who reside in a country for at least 12 months cannot be distinguished from other residents who are not migrants as these statistics are based on residence and not migratory status (Alvarez et al., 2015: 43). In the second component of remittances – “personal transfers” – the IMF considers if a transfer is made across borders, regardless of the residency status, nationality or country of birth of a person, as this information is often not available. The receiver or sender of the money transfer may thus not only be a migrant but also a citizen with links to another country, for instance. Thus, remittances can be conflated with larger sums of money sent by private investors and diaspora members for business investments, property purchase and other financial transactions. This leads to the probable overestimation of transfers.

When comparing remittances estimates over time, it is important to note that the documented growth in remittances globally in recent years may have actually derived from changes in how remittances are measured, rather than actual increases in such financial flows (Ratha, 2003; World Bank, 2006; Clemens and McKenzie, 2014). Almost 80 per cent of the increase in recorded remittances during the period 1990—2010 may be accounted for by changes in measurement, and only a fifth may reflect changes due to higher numbers of international migrants and the incomes they are likely to be earning in destination countries. In addition, both reporting of remittance transactions has been improved and migrants have increasingly used more formal payment methods as informal channels decreased as part of anti-money laundering measures (Ibid.).

It is also important to keep in mind that IMF and World Bank estimates focus on remittances transferred through official channels, such as banks. Not all small transactions by migrants conducted via money transfer operators (such as Western Union), post offices, mobile transfer companies (like M-Pesa in Kenya) are included in all the countries, neither are informal transfers (such as via friends, relatives or transport companies returning to the origin community), depending on the sources of data used by different central banks. As these transfers that are not systematically included in balance of payments can be significant in volume, in particular in the context of South-South corridors, the official figures are likely to  underreport the phenomenon by as much as 50 per cent (Irving et al., 2010; World Bank, 2011). Due to the largely unknown scope of informal transfers, some countries, in particular in sub-Saharan Africa, do not report remittances figures to the IMF in their balance of payments. Data on remittances also vary from country to country due to differences in the availability of data, national legislative and policy frameworks, using citizenship instead of residency status in the definition, and for the simplification of processing the data (Irving et al., 2010; World Bank, 2011; Plaza and Ratha, 2017).

The extent of the over and underestimates are, however, unknown and difficult to calculate (IOM, 2018). Specific, representative migration and remittances surveys can provide more detailed, and reliable information at the national or local level (World Bank, 2011). This also includes commodity transfers, such as consumer items, that are not part of the official recordings but that can be significant, especially in South-South contexts (Melde and Schicklinski, 2011).

Bilateral remittance estimates are prone to the limitations of data on migrant stocks described here. The calculation is based on the gross national income (GNI) per capita in the origin country of the migrant and thus cannot account for GNI being higher there as the assumption is that migrants move to countries with higher incomes. The World Bank further acknowledges issues around not being able to attribute a transfer to a specific country, especially when passed through an international bank (Ratha and Shaw, 2007). It is thus important to underline that these are calculated estimates and do not represent accurate figures (Alvarez et al., 2015).

The testing of remittance channels through fictitious transfers of money by World Bank analysts entails significant limitations as well. Only a few corridors are monitored. Differences in transaction costs based on the amount sent, with the higher amounts likely to cost less to send, distorts the  representativeness of relevant data. Costs may also change quickly, meaning the reported transaction costs rapidly become outdated (Alvarez et al., 2015). Nonetheless, estimates of transaction costs can help to monitor progress towards the Sustainable Development Goal (SDG) target of reducing sending costs to 3 per cent of the amount remitted. 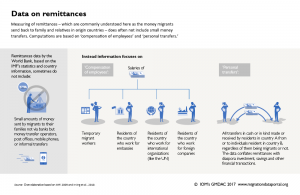 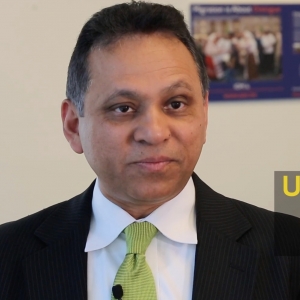 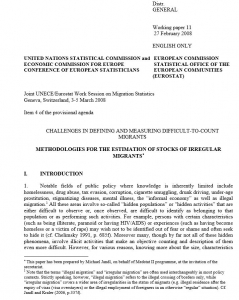 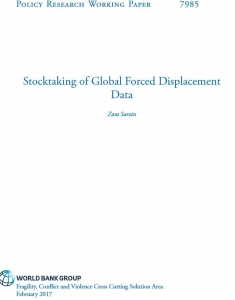 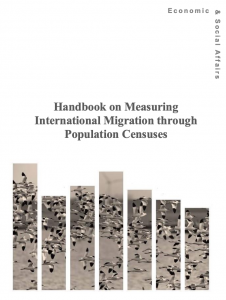 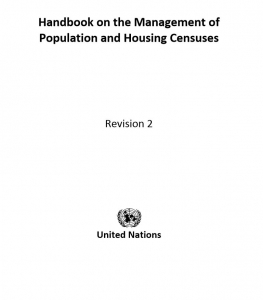 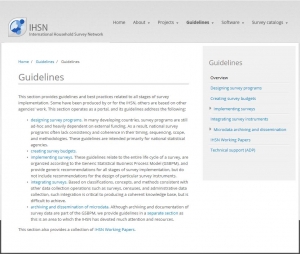 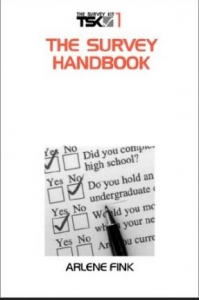 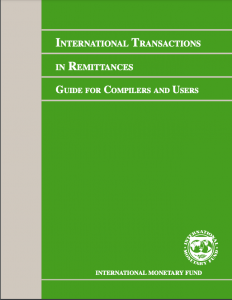