UNITED WE WATCH: A Pilot Study on the Effect of the Global Migration Film Festival on Social Cohesion 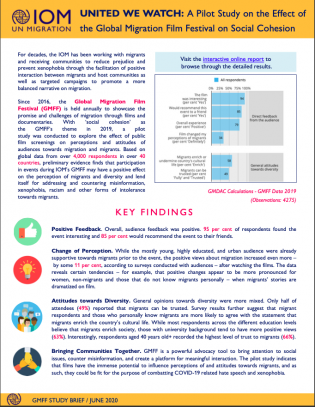 For decades, the IOM has been working with migrants and receiving communities to reduce prejudice and prevent xenophobia through the facilitation of positive interaction between migrants and host communities as well as targeted campaigns to promote a more balanced narrative on migration.

Since 2016, the Global Migration Film Festival (GMFF) is held annually to showcase the promise and challenges of migration through films and documentaries. With ‘social cohesion’ as the GMFF’s theme in 2019, a pilot study was conducted to explore the effect of public film screenings on perceptions and attitudes of audiences towards migration and migrants. Based on global data from over 4,000 respondents in over 40 countries, preliminary evidence finds that participation in events during IOM’s GMFF may have a positive effect on the perception of migrants and diversity and lend itself for addressing and countering misinformation, xenophobia, racism and other forms of intolerance towards migrants.

UNITED WE WATCH: A Pilot Study on the Effect of the Global Migration Film Festival on Social Cohesion