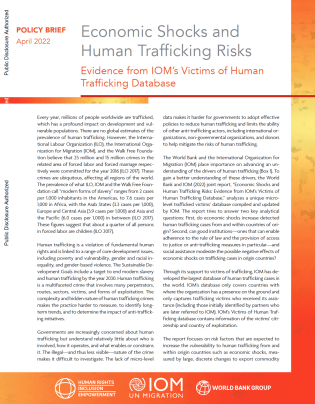 This policy brief presents the main findings of the report “Economic Shocks and Human Trafficking Risks. The report focuses on risk factors that are expected to increase the vulnerability to human trafficking from and within origin countries such as economic shocks, measured by large, discrete changes to export commodity prices and to GDP. It also explores the role that institutions play through enforcing the rule of law, providing access to justice, and implementing anti-trafficking policies, as protective factors that could weaken the link between economic shocks and an increase in human trafficking. The analysis verifies that economic shocks are significant risk factors that increase vulnerability to human trafficking. In origin countries, economic vulnerabilities, especially those caused by global commodity price shocks, are strongly positively correlated with observed cases of trafficking. For instance, the economic shock produced by a typical decrease in export commodity prices is associated with an increase in the number of detected victims of trafficking of around 12 percent. The analysis suggests that good governance institutions and particularly a commitment to the rule of law and access to justice as well as stricter anti-trafficking policies and social assistance can have a limiting effect on the number of observed cases of trafficking following economic shocks.