Are population censuses in Asia and the Pacific evolving? 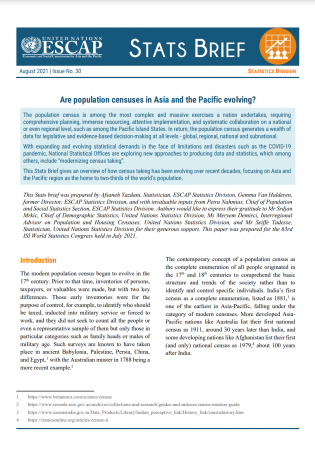 The population census is among the most complex and massive exercises a nation undertakes, requiring comprehensive planning, immense resourcing, attentive implementation, and systematic collaboration on a national or even regional level, such as among the Pacific Island States. In return, the population census generates a wealth of data for legislative and evidence-based decision-making at all levels - global, regional, national and subnational.

With expanding and evolving statistical demands in the face of limitations and disasters such as the COVID-19 pandemic, National Statistical Offices are exploring new approaches to producing data and statistics, which among others, include “modernizing census taking”.

This Stats Brief gives an overview of how census taking has been evolving over recent decades, focusing on Asia and the Pacific region as the home to two-thirds of the world’s population.