Anticipating future migration flows encompasses an increasingly diverse field of approaches. Early warnings systems, foresight (scenarios) and forecasting are the three main approaches intended to provide informed guesses about future migration flows and trends. These approaches can provide crucial information for policymakers to anticipate future challenges and adjust policies, design programmes and allocate resources. Rather than providing an accurate prediction of future flows, many projects aim to highlight the inherent uncertainty of future migration and work towards greater preparedness and resilience through setting up contingency plans for various future possibilities. All approaches hinge on the underlying data that they use, such as experts, administrative data, surveys or censuses. Predictions in the field of migration appear particularly difficult given the complexity and diversity of the migration processes, the limited availability and quality of data, and the limited understanding of the migration drivers.

Migration forecasting attempts to predict future migration flows and trends using, traditionally, quantitative modelling methods with a medium and long-term horizon (Bijak, 2011; Disney, 2015). This approach statistically models future migration trends based on quantitative data from the past. This type of modelling is possible when rich numerical data are available, for example, on past inflows and outflows, policy changes, as well as various other migration factors and drivers. (Sohst et al., 2020; Bijak, 2016).

This approach tends to use qualitative scenario methods to describe future migration flows and trends. Migration scenarios are qualitative narratives about the future of migration that examine possible structural changes and their consequences for migration (Vezzoli et al., 2017; De Haas et al. 2010). They can be understood as thought experiments of the type “What if…?”. Scenarios are typically developed by a group of experts engaging in systematic group discussions (Sohst et al., 2020).

Foresight approaches largely rely on subjective opinion and judgment of experts. As such methods do not have to take into account statistical information about trends, it can be used when past data are limited, not comparable or infrequent. Some approaches have attempted to combine qualitative and quantitative information in forecasting, for example by using expert-based probabilistic methods (Lutz et al., 1998), or – more recently – Bayesian statistical approaches (Bijak, 2011; Bijak and Wiśniowski, 2010; Bijak and Bryant, 2016), applied recently at the global level (Azose et al., 2016; Sander et al., 2013). 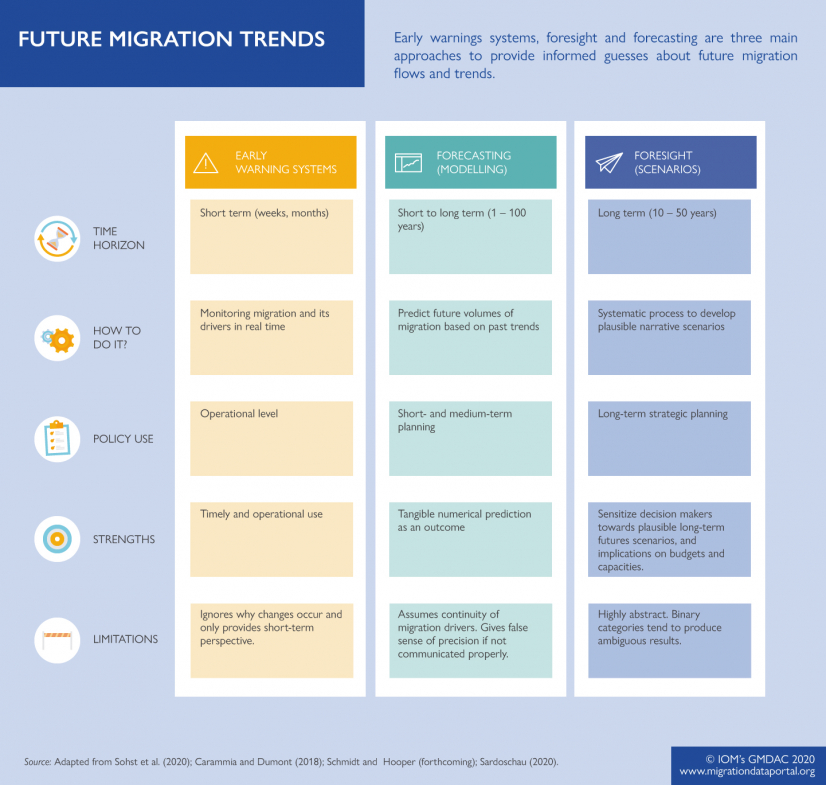 Global migration projections vary in their predictions of future migration flows and trends (Buettner and Muenz, 2016). Researchers at the Vienna Institute of Demography, combining expert opinion and forecasting, project global flows of international migrants for five-year period for 2015-60 for three different scenarios. According to their estimations, the number of international migrants in those decades will remain almost constant, reaching a peak in 2040-45 and then a slight decline (Sander et al., 2013). The lower bound scenario estimates 29 million international migrants across the five-years interval, the medium scenario 33 million, and the upper bound scenario 50 million. The estimated global levels vary by region. In the medium scenario, researchers project that there will be 8 million international migrants in Europe and North America respectively during 2055-60; 5 million in West Asia; 4 million in Africa; 3 million from the former Soviet Union countries; and approximately 1 million in Oceania, Latin America, East Asia, South-East Asia and South Asia, respectively.

The 2019 estimates from the United Nations Population Division assume constant net migration levels between 2019 and 2100. Net migration can be understood as “the difference between the number of immigrants arriving in and the number of emigrants leaving from a particular country during a certain period of time” (UN DESA, 2019). At the global level, the sum of such migration levels is equal to zero, meaning that the number of immigrants arriving in all countries is the same as the number leaving from those same countries. According to the report, it is plausible to believe that migration levels will be constant until 2100 because migration flows “have historically been small and have had little impact on the size and composition of national populations.”

Previous estimates from the UN, by contrast, assumed that net international migration would, by 2095-2100, reach half the levels projected for 2045-50 (UN DESA, 2019). By relying on this assumption, and by interpreting net migration figures as gross immigration, researchers estimated that in the 2010-15 period the recorded total net immigration for the world was 25 million, and also estimated a decrease to 16.6 million during 2020-25 and a further reduction to 13.7 million across five year periods between 2030-50 (UNDP in Buettner and Muenz, 2016). In a comparison exercise of the UN and the Vienna Institute of Demography estimates, researchers concluded that while UN estimates are smaller — as expected because they account only for gross immigration and not gross migration — trends are quite similar (Buettner and Muenz, 2016).

At the national level, many governments conduct migration forecasts. Such forecasts vary on their inclusion of scenarios, number of migrant subgroups, projection period, assumptions, and methodology (Cappelen et al., 2015). Some of the examples that are publicly accessible include Canada, Germany and Australia.

The Organization for Economic Cooperation and Development (OECD, 2017) developed global migration scenarios narratives for 2030. In the scenario characterised by a successful implementation of the Sustainable Development Goals, the change in the average annual global migration flows over 2015-30, as compared to 2000-15, is expected to increase above 3.3 per cent but below 4 per cent. On the contrary, in a scenario of conflict and unilateral and fragmented international cooperation, future flows would decrease below 3 per cent over 2015-30, as compared to 2000-15.

In an exploratory study, the International Organisation for Migration (IOM)’s Global Migration Data Analysis Centre (GMDAC) and the Netherlands Interdisciplinary Demographic Institute combined two separate methodological approaches: migration scenarios and a Delphi expert survey (Acostamadiedo et al., 2020). According to the results, total immigration flows to the European Union (EU) in 2030 might increase between 21 and 44 per cent compared to the average yearly immigration flows recorded between 2008 and 2017. 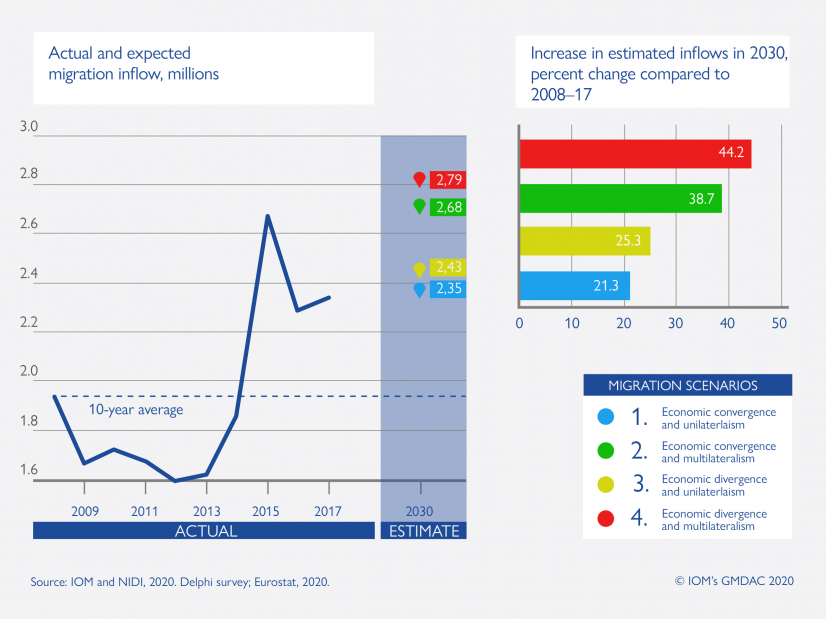 Quantitative migration forecasts are often produced by National Statistical Offices and university research institutes and most often focus on a particular region or country. There are a few large providers of population projections at the global level that include projections of international migration:

Other datasets have been made available for particular regions, for example, the European Union's EUROPOP, produced by Eurostat, is the most recent edition covering  the period between 2018 and 2100 (EUROPOP, 2018). These datasets from Eurostats provide information at national level across 29 European countries: for each EU-28 Member State and Norway.

Despite these benefits, scenarios have shortcomings.

Bijak, J. and Wiśniowski, A. 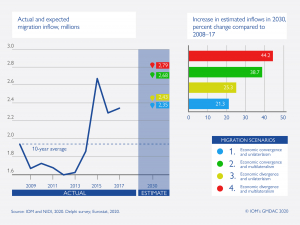 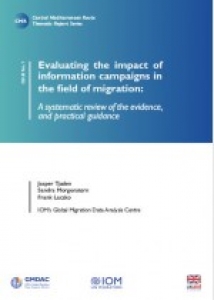 Central Mediterranean Route Thematic Report Series: Evaluating the impact of information campaigns in the field of migration: A systematic review of the evidence, and practical guidance | Issue No. 1 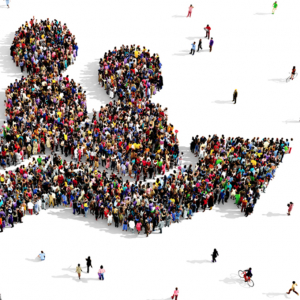 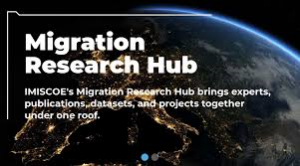