The region of Central America1 (including Mexico) can be characterized by the following migration dynamics: (1) outmigration from countries in the region to Northern America, in large part to the United States; (2) intraregional migration flows (migrants originating from countries in the region moving to other countries within the same region), with the main destination countries being Mexico, Belize, Costa Rica and Panama; (3) transit flows (mainly of migrants originating from the Caribbean, South America, Asia and Africa) through countries of the region often with the intention of arriving to Northern America; as well as (4) notable return migration flows mainly from the United States and Mexico to countries of origin in northern Central America (Honduras, Guatemala and El Salvador).

More recently, the region has been the destination of mixed flows of refugees and migrants from Venezuela, with Panama, Mexico and Costa Rica serving as the main destination countries (International Organization for Migration (IOM) and the office of the United Nations High Commissioner for Refugees (UNHCR), Inter-Agency Coordination Platform for Refugees and Migrants from Venezuela (R4V).

Beginning in early 2020 onward, the COVID-19 pandemic has made a significant impact on migration in the region. Overall regional mobility, migrant returns, migration routes and practices, migrant apprehensions recorded in Mexico and at the southwest United States border, visa issuances, as well as a multitude of other related phenomena have been affected by the pandemic, in part due to movement restrictions and health and sanitation measures implemented by countries in the region in order to contain the spread of the virus (IOM, 2020).

Considerable displacement events caused by the 2020 hurricane season (historically one of the most active registered in the Atlantic) added to the changes witnessed in 2020 as result of the pandemic. Guatemala, Honduras and Nicaragua in particular were deeply impacted by Hurricanes Eta and Iota in November 2020, and the pandemic has complicated the disaster response in the region (Internal Displacement Monitoring Centre (IDMC), 2021).

In terms of migration data, the main sources of information in the region are derived from administrative records on migration collected and published by migration and border control authorities in countries in the region. Important statistical information on migrants, migration and relevant themes is also collected and distributed by national statistics and census offices, other line ministries and central banks (IOM, 2019). 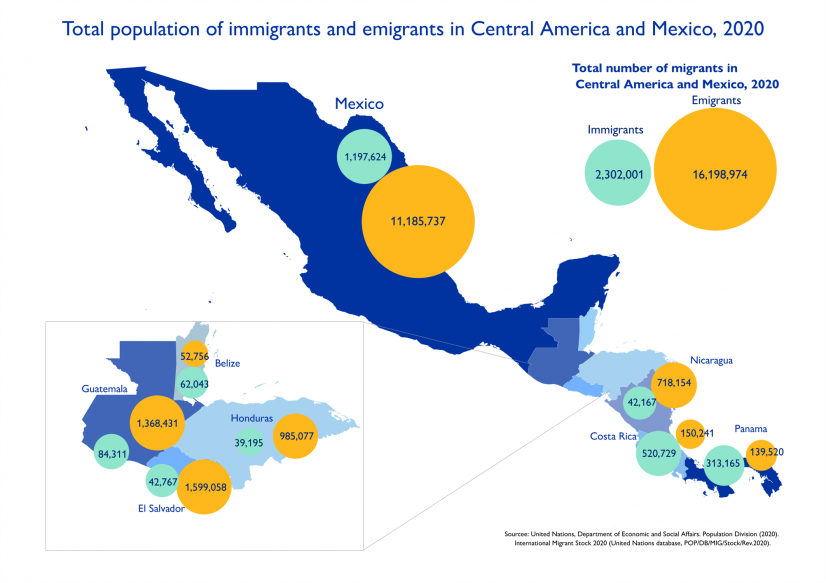 Travel and mobility restrictions, borders closures, health and sanitation requirements and other measures implemented by countries in and outside of the region appear to have made a significant impact on migration dynamics in Central America in 2020 and 2021.

Between March and April 2020 (when most restrictions were implemented for the first time), there was a 47 per cent decrease in apprehensions recorded at the southwest United States border (the majority were apprehensions of migrants originating from countries in Central America) (U.S. Customs and Border Protection, 2021). Migrant returns to countries of origin in the region were also impacted - during the first eight months of 2020, 115,480 fewer people were returned to countries of northern Central America, representing a decrease of 63.9 per cent compared with the same period in 2019 (IOM, 2020).

Recently, travel restrictions have gradually been lifted or revised in the region, often accompanied by other sanitary measures aimed at containing the spread of the virus. Immigration pre-checks, the requiring of negative COVID-19 PCR tests as an entry requirement, health questionnaires, mandatory quarantines and proof of health insurance coverage are common throughout the region.

Despite closures and movement restrictions, the Central American Integration System (SICA) designed a Regional Contingency Plan which highlighted the need for humanitarian corridors that facilitate the voluntary and safe return of Central Americans stranded in the region as a consequence of the pandemic (SICA, 2020).

The number of migrants from Central America has increased significantly over the past 30 years, by 137 per cent between 1990 and 2020, from 6.82 million to almost 16.2 million (UNDESA, 2020). Between this period, the countries of origin in the region that have registered the highest growth rates in their emigrant population were Honduras (with an increase of +530%), Guatemala (+293%), and Mexico (+154%), while the countries of origin that have registered the lowest growth rates in their emigrant population were Panama (+4%), El Salvador (+29%) and Belize (+46%) (Ibid). Of the 16.2 million emigrants from Central America and Mexico in 2020, 51.3 per cent were men and 48.7 per cent were women (Ibid).

The United States was the main destination country for refugees and asylum seekers from the region, accounting for 74 per cent of the global total by the end of 2020 (Ibid).

The region of Central America and Mexico has a population of 179.6 million people. Of these, it was estimated that 2.3 million were international migrants, constituting 1.3 per cent of the region’s total population in 2020 (UNDESA, 2020). The immigrant population in the region has increased by 1.2 million (106 per cent) between 2000 and 2020 (Ibid). The region fulfills both the role of a destination for immigrants, mostly from other countries in the region, as well as a transit region for northward migration flows to the United States. The main destination countries of intraregional migrants are Costa Rica, Mexico and Belize (Ibid).

Costa Rica has historically been a destination country for permanent and cross-border migrants from Nicaragua. According to data from the General Directorate of Migration and Foreigners (DGME), from 2006 to 2020 the number of Nicaraguans residing permanently in Costa Rica increased by 44 per cent (DGME, 2020).

Mexico has mainly been a country of origin of international migrants. However, in recent years, Mexico has become an important destination and transit country for both intra-regional and extra-regional migrant flows (IOM, 2020). The total population of international migrants in Mexico increased by 72 per cent since 2000, reaching 1.2 million in 2020 (UNDESA, 2020). The main countries of origin of immigrants in Mexico in 2020 were the United States (67%), the Bolivarian Republic of Venezuela (6%), Guatemala (4%), Honduras (3%) and El Salvador (1.4%) (Ibid).

As a proportion of the total population, Belize has the largest immigrant population in the entire region, as international migrants made up 15 per cent of its population in 2020 (Ibid). Immigrants in Belize originate mainly from Guatemala, El Salvador and Honduras, often moving to Belize in search of work (IOM, 2020).

Panama is one of the main destination countries in the region for extra-regional migrants. Among the main countries of origin of immigrants in Panama are Colombia and the Bolivarian Republic of Venezuela. According to data from the National Migration Service of Panama (SNM), immigrants from both countries constituted 40 per cent of the total number of regularizations registered in Panama in 2020 (SNM, 2020).

In the case of the immigration of Venezuelan refugees and migrants, it is estimated that a total of 254,000 were residing in Mexico, Costa Rica and Panama by May 2021. Of these, 48 per cent were located in Panama (R4V, 2021).

The region also serves as a transit point for migrant flows of Caribbean migrants – mainly from Haiti and Cuba – as well as extracontinental migrants – mainly from Asia and Africa – who are often first detected transiting irregularly in the southern region of ​​Panama, in the Darien Zone near the border with Colombia. Although migrants from Haiti and Cuba constitute the majority of migrants identified in this area, according to data from the SNM of Panama, from 2014 to 2019 the number of African and Asian migrants identified transiting irregularly through the Darien Zone increased by 715 per cent (SNM, 2021).

While 2020 saw declines in the number of Caribbean and extra-continental migrants registered transiting through Panama, cases have begun to rebound in 2021 (Ibid). In Mexico as well, despite an exceptional drop in apprehensions of Caribbean and extra-continental migrants during 2020, numbers for 2021 for these groups have begun to gradually increase (SEGOB, 2020).

Irregular migration from and through the region is also a prominent dynamic. Both Mexico and the United States detect large numbers of people trying to enter through unofficial channels and border points each year. During the period January-April 2021, Mexican authorities encountered a total of 56,622 irregular migrants. Of this total, 94 per cent originated from Honduras, Guatemala and El Salvador (SEGOB, 2021). In the case of the United States, during the months of fiscal year 2021 (October 2020 - May 2021), approximately 898,000 individuals were apprehended, of which 85 per cent originated from countries in Central America. Most apprehensions in this period were of migrants of Mexican origin (U.S. Customs and Border Patrol (USBP), 2021).

Return migration from Mexico and the United States to the three northern countries of Central America has long been a prominent feature in the region. According to the IOM's Northern Triangle Migration Information Initiative (NTMI), from 2013 (the year in which official data first began to be registered and reported in the platform) until the end of 2020, approximately 1.32 million migrants were returned to Honduras, Guatemala and El Salvador – of these, 47 per cent were returned from the United States (NTMI, 2020).

In 2020, it is estimated that the Central American region experienced more than one and a half million new displacements driven by disasters, with Honduras (61% of the regional total) being the country most affected (IDMC, 2021). Events associated with storms and hurricanes, as well as resulting floods and landslides are some of the major drivers of internal displacement associated with disasters in the region (Ibid).

Migration line ministries in countries in the region are principally responsible for collecting and publishing migration data. However, there are also a variety of other entities that collect and publish information and data related to migration and migrants. These entities include, amongst others, national census and statistics offices, social ministries dedicated to health, education or otherwise, as well as national and immigration police and central banks. Given that information and data on migration is often collected between a multitude of national actors, it is often difficult to obtain standardization and timely availability of information.

National statistics and census offices oversee the realization of population and household censuses which cover the entire population, including migrants, as well as population surveys which sometimes collect information relevant to migrant populations. Most countries in the region implement their population censuses every 10 years. Most administrative data made available by migration line ministries are derived from information collected at immigration and border points.

Strengths and limitations of data sources

2018 Uprooted in Central America and Mexico

2019a DTM: Venezuelans’ Vulnerability to Exploitation, Trafficking and Discrimination in Central America and the Caribbean. San José, Costa Rica.

2016 Labour Migration in Latin America and the Caribbean. Diagnosis, Strategy and ILO´s work in the region. Lima, Peru.

The Organization of American States (OAS) and IOM

Economic Commission for Latin America and the Caribbean (ECLAC)

1 According to the geographic divisions of the United Nations Department of Economic and Social Affairs (UNDESA), and for the purposes of this page, the Central American region comprises the following countries: Belize, Costa Rica, El Salvador, Guatemala, Honduras, Mexico, Nicaragua and Panama. 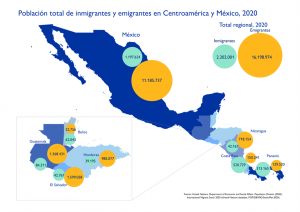 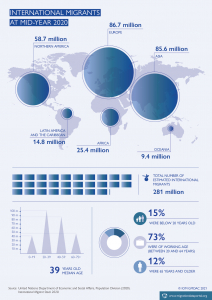 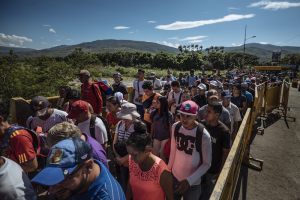 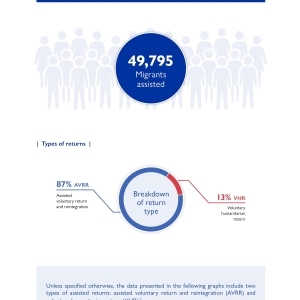 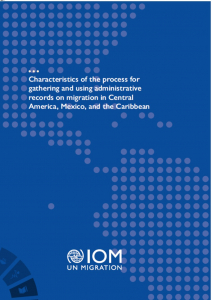